Let's find out what the Citronella, its history and its property as a repellent against insects, especially mosquitoes.

Its stem is erect and with ribbon-like and drooping leaves of an intense green color. which emanate a pleasant citrus scent. They are mowed at the base every 3-4 months to be dried or subjected to distillation to obtain the essential oil.

There are about fifty species, but those that are used for the production of the essence are mainly two: Cymbopogon Nardus e Cymbopogon winterianus. 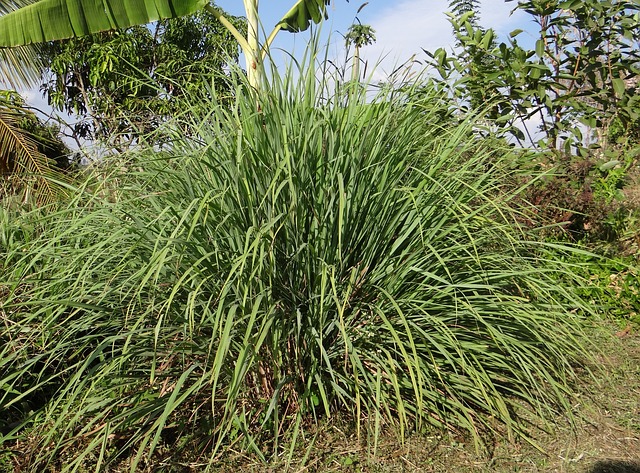 Lemongrass: a bit of history

Although originally from the Far East, it has been known in Europe since ancient times. This is evidenced by its botanical name which derives from Greek word "pogon" which means beard, and refers to the feathery appearance of its inflorescences. Apparently they were the soldiers of Alessandro Magno to spread the plant in the West, after having met it in India where it was called "fever grass" because it is used to combat malarial fevers.

In the past an oil was obtained which was also used in cosmetics and, in Middle Ages, mixed with olive oil, myrrh and cinnamon was used in sacred celebrations.

To date theEPA (United States Environmental Protection Agency) considers Citronella oil a bio-insecticide with a low-impact mechanism of action. As it has no toxicity, it is in fact considered safe for humans, animals and the environment.

Mostly known for her own repellent effects against mosquitoes, used for the production of lotions, sprays, candles, etc., Citronella also has many other properties.

It's great antioxidant as well as one antiseptic, antimicrobial e analgesic. Used for the treatment of flu symptoms and in the case of digestive difficulties, it is also useful to combat insomnia. 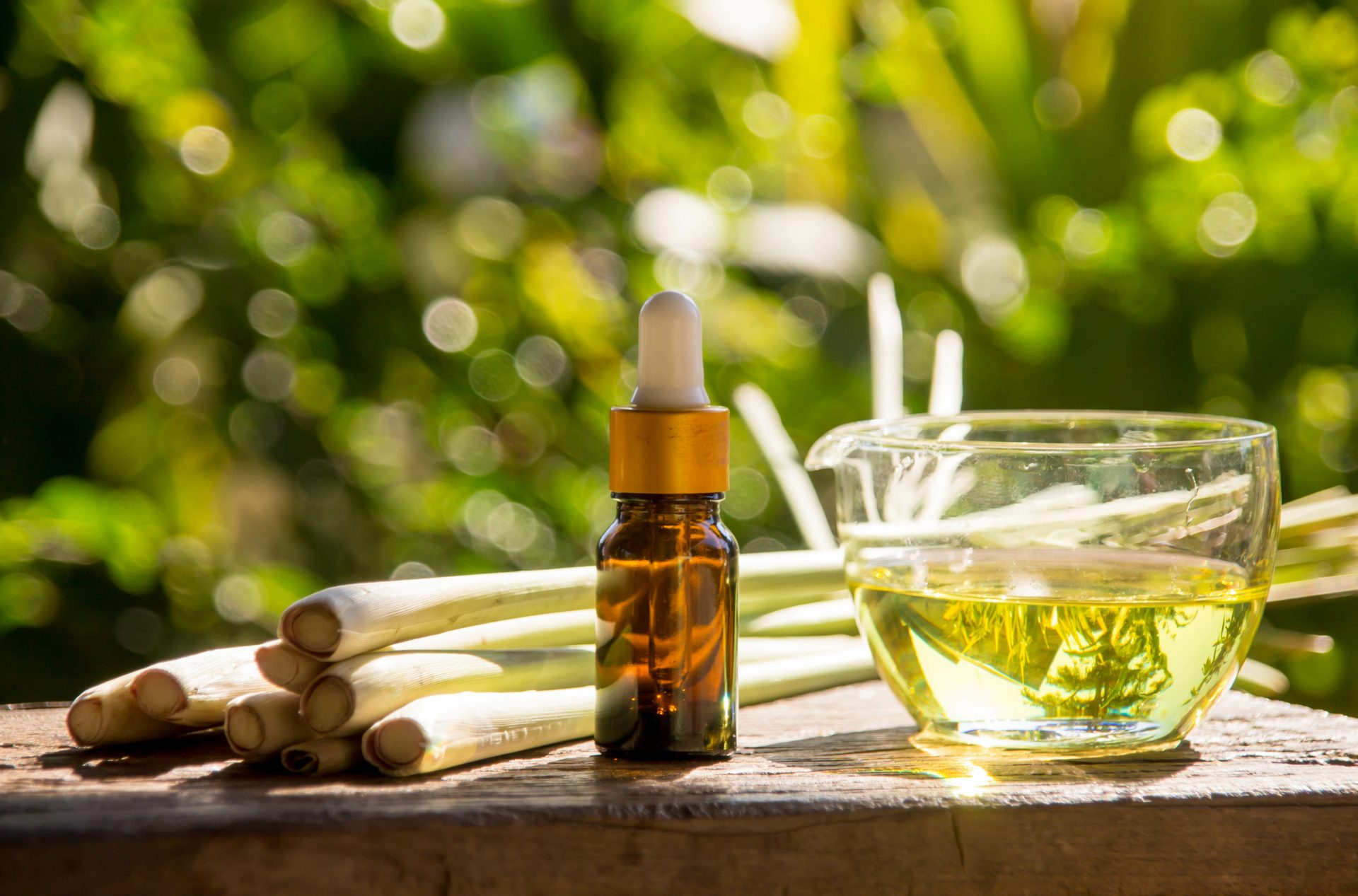 The infusion of Lemongrass significantly lowers the levels of cholesterol and it is a valid diuretic.

As already mentioned, its ability to repel mosquitoes is the best known but, dried and stored in drawers, it also keeps away the intestines.

Especially in the East it is also used in the traditional cuisine e infused with tea, giving the drink a lemon flavor making the use of citrus unnecessary.

For over 20 years, the scientific and working community of Union BIO has dedicated i results of studies and research in the field of phytotherapy by formulating safe and effective products.

In our laboratories a constant updating guides us in the formulation of the products, but above all in the synergy between ingredients of plant origin. These are enhanced by our exclusive MATRIX UB®, registered trademark, extract of the olive tree, which strengthens and consolidates the properties of the formulations.

Within our lines Dog Cat e Horse, we offer various products that contain the plant extract of Citronella, formulated for the well-being of our animal friends.

In spring and summer it is essential to protect our dog, especially if we live in areas prone to infestation. It is important to apply one protection especially before the walk, but also during outdoor activities. NO FLY DOG spray lotion is easily applicable and is rich in plant extracts including Lavender, Geranium and Citronella. Its delicate formulation allows it to be used even during lactation, on puppies and elderly dogs. 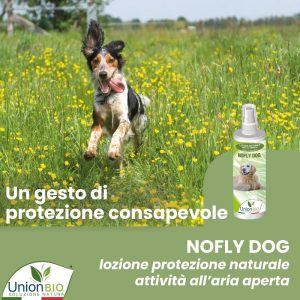 For the care and well-being of the horse, it is important avoid contact with external agents which can cause serious problems. The use of natural products, to create a protective barrier, it can represent a valid help during outdoor activities, both for the safety of the horse and the rider. NEW EQUINOFLY (lotion) e EQUINOFLY SOFT (gel) are rich in plant extracts including Citronella and Tea Tree and protect the animal from annoyances during walks and outdoor life. They can also be applied several times a day and release a pleasant and persistent fragrance of Citronella. 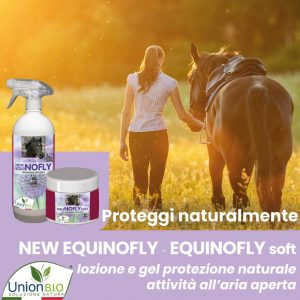 To protect the well-being of the horse we must guarantee constant hygiene of the box.  EQUIBOX it's a sanitizing detergent formulated with plant extracts including Citronella and Geranium. It reduces bad smells such as ammonia, indole, skatole and promotes biological stability by slowing down the degradation processes. It also maintains a balanced level of humidity in the litter, ensuring the health of the foot and limiting dust, spores and pollen, thus also avoiding the problems related to the respiratory tract and hoof. 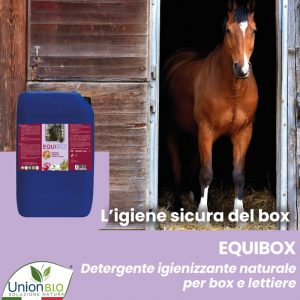 Let's discover Shea Butter, its history and its many properties. Shea Butter: classification Shea Butter is a ...

END_OF_DOCUMENT_TOKEN_TO_BE_REPLACED

Ticks even in winter. The answer is… NATURAL!

What is the right time of year to start anti-parasite treatments against ticks and fleas for our dogs and cats? The answer ...

END_OF_DOCUMENT_TOKEN_TO_BE_REPLACED

Katy and her Sunday: find out how to use Union BIO products

Katy with her Sunday shows us how some of our products are used! Watch the video and find out how to take care of your horse.

END_OF_DOCUMENT_TOKEN_TO_BE_REPLACED

From 3 to 6 November we will be at Fieracavalli, the trade fair dedicated to horses and horse riding that takes place every year in Ver ...

END_OF_DOCUMENT_TOKEN_TO_BE_REPLACED

No to mosquitoes, yes to well-being: what to put in your holiday suitcase

For many of us the holidays are approaching and in the excitement of the departure we must not forget to pack what we need ...

END_OF_DOCUMENT_TOKEN_TO_BE_REPLACED

Spring in the stable: tips for the well-being of the horse

It's spring: a new season begins in terms of competitive and amateur activities and things to do to take care of the horses and the structure.

END_OF_DOCUMENT_TOKEN_TO_BE_REPLACED

UNION BIO at the Cosmofarma Exhibition in Bologna

From 13 to 15 May Union BIO will be present at Cosmofarma Exhibition, the leading event for all services related to the world of pharmacy.

END_OF_DOCUMENT_TOKEN_TO_BE_REPLACED

Let's find out what Arnica is, its history, its properties as a natural anti-inflammatory and analgesic useful in the treatment of pain ...

END_OF_DOCUMENT_TOKEN_TO_BE_REPLACED

In horses, advancing age leads to a gradual deterioration of physical condition. Here's how to deal with it.

END_OF_DOCUMENT_TOKEN_TO_BE_REPLACED

The BLACK FRIDAY by UNION BIO: -30% on all products!

Union BIO Black Friday 2021 lasts until Monday 29 November! Buy from our online shop with a 30% DISCOUNT on all ...

END_OF_DOCUMENT_TOKEN_TO_BE_REPLACED

CATS AND GASTRITE: A COMBINATION NOT TOO RARE

Even the cat can suffer from gastritis often related to the ingestion of spoiled foods or toxic substances or the presence of hairballs.

END_OF_DOCUMENT_TOKEN_TO_BE_REPLACED

HYGIENE OF THE HOUSE WITH CHILDREN AND PETS

It seems like an impossible task to keep the house clean when you have children and pets, but if we know how to organize ourselves ...

END_OF_DOCUMENT_TOKEN_TO_BE_REPLACED

This site uses Akismet to reduce spam. Find out how your data is processed.

Sign up to our newsletter
and get a 5% discount immediately

Start typing to see the products you are looking for.
Shop
Sidebar
Wishlist
0 items Cart
My account
×